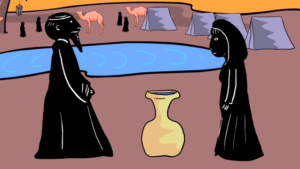 The life of Sarah begins with her death. And from death, new life begins.

Eliezer – Abraham’s servant – was sent to find a wife for a now ageing Yitz. Yitz is alone. He is alone like the silence around him. He is bereft of a father he can trust, and with her death, he is now bereft of his mother. And, increasingly, with his sight diminishing, Yitzhak has a smaller and smaller mah, a perimeter beyond which he does not let himself step. He is alone.

He is lonely in his emptiness. He only leaves his rough flap of a make-shift tent to wander into the fields at even time. He stands in the late drooping light, listening to birds sing their praises of light and of worms, and he feels the meadow grasses brushing against him softly, the only touch he can abide.

He silently yearns for something – someone – perhaps the nameless One? Not yet. He is still burning with betrayal, even as he knows somewhere in his being that his father Abraham was just trying to meet some testy demand of the One. Whenever he drifts towards that last journey with his father, all Yitz can think of are words like appeasement, malicious, betrayal in a rushing thicket of words that hobble his mind. The grasses stroke against him quietly, and then a teasle thorn caught against his miel, his tunic and the loosened miel slipped back from his shoulders. As he first held, then readjusted the tangle of rough wool in his hands, he stopped. He listened. He looked up.  Yes, there, in the distance. He hears a caravan approaching, but who is drawing near? He tightens his miel closer against the chilling air, and waits, standing, frozen in his fear of other. The air is quiet now. Still.

All he can feel is the plodding gait of the camels, the g’malim – and he thinks back to that other walk, uphill, the branches for the offering strapped to his back. He feels their weight, their hard dry shove against his backbone, his insistent question, his not-yet-dread beginning to calcify those same bones. His questions deflected, he continued to walk. And now, he stands very still, barely touching the sprouting grasses that surround him. The light is dimmer, the camels approach.

He knows within those same bones – how does his know this? – he knows this approaching caravan will change his life-course. He can feel again a pin-prick of a question defiantly opening what had been battened down. He felt that question that moves us all from the ground we once knew to the ground we know not yet, almost bypassing present time and space. Yitzhak wants to avert his eyes – he wants to look away, he wants to step out of this magnetic field that surrounds him, weaving its web tighter and tighter around his feet, so that he cannot step away or closer. He is held by a grip tighter than the hands of his father. He peers into vagueness.

A figure reaches up against the gloaming sky and adjusts what was light into darkness – all he can see is movement, this figure slipping to the ground, near but far, close but distant. He is cold. He cannot move. The figure approaches. Her eyes search his own and she holds his question, and then they both weep with tears of recognition. They begin to stroll through the grasses, their hands stopping occasionally to caress the golden plump seed heads, and too soon they reach the pounded ground outside her tent, the ohel that held the life of his beloved mother, Sarah. Tired canvas sags against the poles, fraying carpets less a welcome than a warning, the entrance laced tightly against the winds.

Slowly, Yitz worries the knots and then unties the laces. He tugs against the ropes pulling them taut, tightening each knot securely to each tent peg. He opens the tent-flap and invites these eyes to enter. He feels his muscles, his ligaments, his bones begin to dissolve into a light familiar, a light that seems to defy the now-night time darkness. יוֹצֵר אוֹר וּבוֹרֵא חשֶׁךְhis father used to say as they walked that walk. Light and darkness are One, he used to say, as fractals of light fractured windows from the darkness of night.

Yitz turned, and faced her eyes again, and he saw that her veil was now unhooked, her layers of shawls loosened. Ani Rivkah, she whispered. I have come, he’neini. And she took her palms and rested them against his brow. Then slowly, sliding down the planes of his loneliness, her hands came to rest, strongly, against his heart. Ani Yitzhak, he whispered into the retreating silence.

In that moment, as golden light filtered into this tent of his mother, his heart cracked. He almost keeled over. He couldn’t breathe. His knees buckled and then her hands caught his arms and she held him. Her strength held him and all the fear in his bones flowed into and through her hands and he looked up into her face. And through her eyes he saw he was whole, a seam of love glinting along his jagged edges, mending what once was broken. Ani Yitzhak.

And it was evening, and it was morning, the first day.

« Vayeira or the Many Shades of Shylock Toldot: Deception – or love? »