A week of beginnings, and Kabbalat Shabbat brings us into the beginnings of Torah – full circle from the final line in Devarim  “… and with all the strong hand and with all the great fear that Moses did before the eyes of all Israel “ to the first line in Bereshit, “When God began to create heaven and earth, and the earth then was welter and waste and darkness over the deep and God’s breath hovering over the waters, and God said, Let there be light.“

This translation is from Robert Alter. Alter opens his Chumash with words about translation; I found these words almost as fascinating as his actual translations. He wrote about the plain spoken prose of everyday Hebrew and the challenge translators have faced trying to be true to time and intention without interjecting their own particular bias.

So too are we challenged to translate each other’s words. We may be speaking the same language but are we hearing the meaning behind the words? Are we imposing our own meaning on to someone else’s words? How do we actually hear each other?

This past Shabbat I began a conversation (to be continued, I hope) about the idea of Indigenous identities, and how those localized identities are often played out against more global identities – with globalism often depicted in pejorative terms. Yet, but, what does this mean for Jews – the most globalized of peoples out of our need to survive? Even as we have found (mostly) refuge on this continent, we are also aware of First Nations peoples struggle to also survive.

I am embedding a map depicting centuries of exiles in Europe. This map of course is preceded by a millennia of exiles and destructions in our own place of indigenous identity, the Land of Israel. Assyrians, Babylonians, and finally the Roman wars virtually ended Jews living in a homeland. 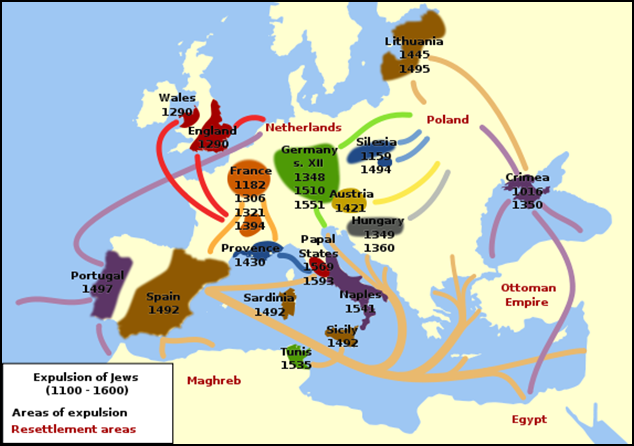 How do we understand our own history as a people so often driven from home, into exile? How do we speak with each other, and support each other as we move forward. How do we hear each other?

Conversation to be continued. Our education committee, so ably headed up by Marilyn Wolovick, will be inviting speakers to address some of these connections and distinctions of cultures over the coming months. We look forward to this engagement.

May the coming year, 5782, hold blessings and long life for each of you,
Rabbi Lynn