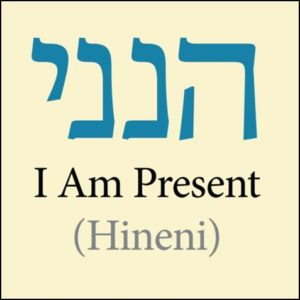 With the opening of Lech Lecha, I realize again how difficult it is to go beyond these two not-so-simple words. Go. Go where? What constitutes a journey, especially in our minds? How do we hear the voice of God: Commanding as in the domain of the Leviathan, or insistent as a mosquito? And how do we understand Lech lecha in the context of understanding the mitzvah of circumcision, brit milah?

I am without that marker of covenant that so concerns God. I am a woman, so covenant holds differently for me; it is not engraved so much on, but in, my body. Covenant is not a marker on my body; I am, in the language of prayer, circumcised on my heart, and thus my soul. Perhaps, for women, our menses can be regarded as a covenant of blood, allowing us to bring children into this world. Yet, that act of begetting, as Bible often references generational continuity, is more an act of physiology than covenant. And, of course, many women do not bear children.

Creation, copulation, castration, and now circumcision and covenant – these “c” words all carry a heavy weight, a kaved, of relationship. These words demand: They demand other becomes as-one, they demand an action that is transformative, changing what was to what is, and now, a cutting that mysteriously becomes covenant. God has demanded this “ot,” as a sign of love, not just of body, but of soul.

Let’s consider that moment of first circumcision we read about in this parashah: Abraham takes a knife, or perhaps a very sharp stone, and then must bring that sharpened edge to his foreskin. It is an almost unimaginable act. I have seen the hands of grown men cup their own genitals, as they wept whilst attending a bris. This act summons another moment, a memory of Avraham holding a knife – the Akedah. Is brit milah, the removing of the orlah, perhaps a foreshadowing of that equally unimaginable act – a father sacrificing his own son – summoned by that same demanding voice of God?

Our Sages had their own questions. Bereshit Rabbah 49.1 suggests that God helped Abraham with this deed, stretching Abraham’s foreskin so that Abraham could make the cut. In another reading from Tanhuma Ye’lammedenu, Lekh lekha 17, a scorpion bit Abraham on his foreskin, thereby conveniently circumcising him. One can feel the squirming, if not to say severe discomfort of these male readers – who ask themselves just how did Avraham manage to accomplish this act?

And so once again, I will return to Don Isaac Abarvanel, who cites Rambam, (not by name, but by idea), when he says that “the nature of the quarry ought to be evident in what was hewn from it,” in reference to Isaac as a descendant of Avraham. Circumcision might be the ultimate identifier, the ultimate mark of Jewish continuity. Abarvanel knew that in his day, many Jews were choosing conversion to Christianity; conversion enabled them to live, circumcision was a signifier of danger. Questions of authenticity hung over them, like that knife in Avraham’s hand, hovering over his beloved son Yitzhak. Were their vows truly authentic? What was hewn from the quarry was now in mortal danger.This question cannot help but bring up the “disappeared” in Argentina, the search for brit milah by vicious Nazi’s. And we must ask – did the mark of Cain become brit milah?

Today, the ritual of brit milah is found to be in question by the very community that has held this “ot” or sign of covenant for millennia. Circumcision has oddly also become a question of authenticity. The word “intactness” is used by those opposed to brit milah, implying a greater authenticity of body, at the very least for those who have not been circumcised. But who has an intact body – are we not all marred (or perhaps mirrored) by the vicissitudes of life?

Evolving new traditions is an oxymoron for many. Yet, we must listen to the many modern-day would-be conversosin our midst. Ferdinand and Isabella are not on the throne, but the lure of Gentility remains. How will we respond?  Judaism is a culture of reminders; the function of our mitzvot is to draw our attention to that larger vision that Abarvanel and our Sages sought. One-ness of body and soul with God. How will we pack this vision of authentic covenant with us on our journeys? Lech Lecha. Go.

And, don’t forget to pack the mohel jokes.

Noach is described not just as a tzadik, a righteous man, he is a tzadikta’meem; he is perfect. Or in Rashi’s words, Noach was simple-hearted in his complete acceptance of God’s ways: “Walk with Him simple-heartedly (bet’mimus) and look for­ward to what He has in store.”

In the word ta’meem we learn that Noach was sincere, an innocent, honest and complete man. Noach had that perfect pitch of true righteousness. Tam is flavour, taste, but Noach’s ta’am was not just flavour, it was his simple acceptance of God, his honest and sincere correctness of execution of Torah that gave him his status of tzadik tameem. But wait – Noach didn’t yet have Torah, did he? Hold that thought.

We also hear in the root la’tom, (which means endings and completions), a foretaste of what is soon to come.

In Bereshit we met Elohim, yet here, we read that Noach walked with HaElohim, not just Elohim, but HaElohim. The use of the direct object reinforces that God is The One, The God (plural). Five verses in to our reading, we see in verse 14 yet another fascinating construction. Noach is told to a’sayl’chatayvat – he is told to build an Ark. Simple.

Our Sage Abarbanel, a commentator who lived in Portugal during the 1400’s, notes in this command, a reproof for Noach. He describes Noach disapprovingly, as someone who chose to remain aloof from the behaviours all around him. For Abarbanel, the Ark symbolized how Noach closed himself from trying to help those around him. Instead, he shuttered himself in his ark and sailed away.

Given the desperate times for Jews in Spain and Portugal during the 13th-15th centuries, it is interesting to note this disapproval in Abarbanel. Apparently, he usually took issues of the times – social, political and certainly religious into consideration; he believed that mere detached Biblical commentary was not enough. He believed that the actual lived lives of Jews must always be considered – even when writing about Torah. It is fascinating to me to note how he brought such issues into his exegesis. One marvels again at how modern pre-modernity seems to be.

We can then read this “simple” command regarding mere boat-building as a timeless and more complicated command. Make of our selves an Ark. We are commanded to become a tayvat, an ark that will float on the waters of Torah, an Ark that will keep each of us safe from the tohuv’vohu (void, wildness) of elemental Nature, an Ark that will represent our individual and collective covenant with God, an Ark that reminds us we are not vildechayim, wild animals, but a people who choose order –a people who choose to walk with God.

And imagine that Judaism –a construction that is yet to come into this narrative, and yet one that hovers over Noach like the proverbial rainbow – is that Ark.

How did Noach know Torah before Torah? Torah was given, before it was given.  How does Torah precede Torah? Perhaps as the eggs of that first mother, so too does Torah lodge in our wombs for generations – hidden, interior, emerging in successions of generations later.

Our bodies are our arks. Our bodies hold our stories past, present and future. New studies in the field of epigenetics are also opening up Torah. Epigenetics literally means “above” genetics. It refers to external effects which can then modify our DNA; modifications that can turn certain genes “on” or “off.” These modifications don’t change our DNA, but they do affect how our cells “read” genes. Studies in epigenetics are also demonstrating that extreme trauma our parents and our parent’s parents may have experienced is held in their cellular structure; trauma that can be passed on to subsequent generations.

For a people who have suffered centuries of trauma, but also of joy, these studies hold incredible import. Pain and joylie within our bodily Arks.

So with Noach, with Abarbanel, let’s build an Ark of our-selves. Let’s not sail away, but sail within, together, an Armada of Torah sailing towards HaElohim.

God creates the world in six days. On the first day He makes darkness and light. On the second day He forms the heavens, dividing the “upper waters” from the “lower waters.”
On the third day He sets the boundaries of land and sea, and calls forth trees and greenery from the earth.
On the fourth day He fixes the position of the sun, moon and stars as timekeepers and illuminators of the earth.
Fish, birds and reptiles are created on the fifth day; land animals,
On the sixth day God creates the human being.

God ceases work on the seventh day, and sanctifies it as a day of rest.

God forms the human body from the dust of the earth, and blows into his nostrils a “living soul.” Originally Man is a single person, but deciding that “it is not good that man be alone,” God takes a “side” from the man, forms it into a woman, and they are united with each other.

Adam and Eve are placed in the Garden of Eden, and commanded not to eat from the “Tree of Knowledge of Good and Evil.” The serpent persuades Eve to violate the command, and she shares the forbidden fruit with Adam. Because of their sin, it is decreed that man will experience death, returning to the soil from which he was formed, and that all gain will come only through struggle and hardship. Man is banished from the Garden.

Eve gives birth to two sons, Cain and Abel. Cain quarrels with Abel and murders him, and becomes a rootless wanderer. A third son, Seth, is born to Adam; Seth’s eighth-generation descendant, Noah, is the only righteous man in a corrupt world.

Bereshit: So many conundrums!

Rashi, the master of p’shat – a simple straight-forward meaning on text – challenges that they typical reading of Bereshit as a Creation chronology is incorrect; Rashi says this usage of “reishit” demands an explanation.  “This verse is nothing if not mysterious. Expound – explain me.” He points out the waters already existed, for example.

He teaches us: “In the beginning”, describes not the clarities of origin and cause, but the potentialities of purpose.”

Our Sages agree and apply the Rabbinic principle that there is no chronology on Torah.

Connect the creation of the world with standing at Sinai.
Anokhi meets anokhi.

The “I’ness”Anokhi of God, of Creation hears the anokhi “I’ness”of the humans standing at Sinai, who say, “na’asehv’nishma“– “we will do, we will make the world.” So from this perspective, Israel (also) creates the world, simply by finding their place and standing at Sinai. The giving of the Torah is commonly referred to as ma’amad har Sinai – the standing at Sinai. How does our own anokhi within, stand and meet the One who is Anokhi?

Omed – What does it mean to stand? To under-stand?

Talmud makes an extraordinary observation about the paradoxes of “standing”: No ‘man’ stands on it (can rightly under-stand)the words of Torah, unless he has stumbled over them.