December 2, 2018 by Rabbi Lynn Greenhough • From the Rabbi's Desk 0 Comments

Today we are discussing elements of the Jewish uniform of prayer – wearing prayer shawls, phylacteries and head coveringstallitot, tefillin, and kippot – all signifiers, until very recently, and still for many women, of male cohesion and belonging.

One of the most beautiful blessings of belonging in Judaism comes from the prophet Hosea. Most of his writing is difficult, it chronicles travail after travail as he tries to meet God’s demands of him.  Yet, as we wrap tefillin, we recite his words from chapter 2:21-22. As the strap is wrapped around the middle finger, we say:וארשתיך לי לעולם, וארשתיך לי בצדק ובמשפט ובחסד וברחמים, וארשתיך לי באמונה וידעת את ה’. 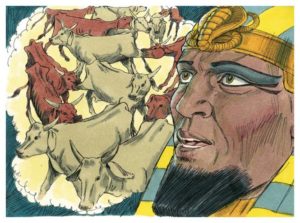 These words of promise and love, fidelity and future are astoundingly beautiful. If Hosea said nothing else, these words would be enough. While some of our more traditionally minded teachers suggest that for women the domain of their homesis the “box” where they more properly connect with God, some of us choose to feel ourselves betrothed to God more directly, even as we may also wash floors and ensure the laundry is done.

But how does this notion of betrothal tie us to Miketz? Miketz continues the saga of Joseph, a saga where the many dreams that he has both dreamt and interpreted, culminate in a succession of weepings, an outpouring of memory, reconciliation and love. Is there a more touching set of emotional sequences in all of Torah? Torah documents Joseph weeping, sometimes quietly, but sometimes he needs to leave the room, sometimes he weeps and wails so that the entire city must hear him. If any of us have had weeping burst from within us, as uncontrollable a feeling as that moment of sexual climax, we know that our bodies are vessels holding depths of emotion at bay, tidal waves of which can cause shuddering wails to literally propel us across a room.

Wrapping leather straps and boxes on our head and arm, as we do when laying tefillin, is an act far more intentional, far less emotionally dramatic, than such weepings, but the words of Hosea bespeak a love that, if gone, might cause us, too, to weep without end. I remember back about ten years to a very bleak time in my life. I was acutely sad, and felt utterly disconnected from my God, from my source of fidelity and stability and joy and hope. I moved through my days like a stick, empty of feeling. My rabbi appeared at my front door; somehow he had heard of my sadness and he brought me words of comfort, and he gave me my words back, words that actually helped me begin to envision ways to get help to recover my sensibility. We all need affirmations of hope. It is a hard world.

Joseph too was that fish out of water. His entire life, political, professional – even his intimate life was with a people other than his own. I cannot imagine the stages of reunion when he first saw and recognized his brothers. We see, in what will be  a further succession of weepings,perhaps a new Creation story, a distinction of his physical body from his liquidity, his body of tears. Maybe our salty oceans were formed from God’s tears as He separated earth from waters, to make room for us, His human companions. Although the word Miketz means “an end”, perhaps Miketz is more a beginning, a re-Creation of hope for Joseph. His weepings are like a watering of his heart that, like hydra-phobic soil, was so hardened from emotional drought that his first tears bounced off the surface of his heart. Only the succession of his weepings – seven in total, could soften him to his brothers.

As we wrap the straps oftefillin 7 times down our arm, we create a tension that binds and holds and affirms love. Our bodies need to feel hope as well as our souls. I wear a wedding ring. Having bound myself to my human partner, how could I not bind myself daily to a God who has lifted me from despair over and over again, to a God who named me into being, to a God who called me from whence I came, to show me that my people and place was indeed all that I had longed for since I was a child.

I heard a phrase on a TV show recently, that moved me deeply. When a child was asked about his future he said, “We have a future we are born into and we have a future we choose.” Winding the straps of tefillin reminds me every day that I am a choosing Jew. Remembering Joseph’s succession of tears reminds me that God is with us, even in our weeping. And I remember that God has chosen me. Forever.

This Shabbat we also celebrate the new moon with Rosh ChodeshTevet and Hannukah – a conjunction of light of moon and of earthly candles, of miracles, memory and hope. So, Chodeshtov, Shabbat shalom, ChagHannukahsameach.

« Vayeshev, No Means No Vayigash »