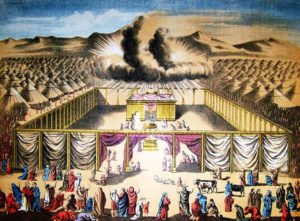 We open up Pekudei and read:

“These are the “accounts”, the records of the Tabernacle, the Tabernacle of the Pact, which were drawn up at Moses’ bidding—the work of the Levites under the direction of Ithamar son of Aaron the priest.”

We begin with a financial accounting. Pekudei is the final of the five last Torah parashiot in Exodus, detailing every aspect of construction of the Ark, the Mishkan. All costs and every gift must be carefully recorded.

We learn from this brief line an important lesson for all shul treasurers, and, indeed, for all who are charged with keeping public records. From this line, our Sages teach that we should always appoint at least two people to act together in their work as trustees over all public funds.

In Midrash Tanchuma; Mishnah, Shekalim 3:2, we learn: “The one who withdrew [monies donated to the Holy Temple] did not enter the chamber wearing either a hemmed cloak, shoes, sandals, tefillin or an amulet (i.e., nothing in which money can be hidden), lest if he became poor, people might say that he became poor because of an iniquity committed in the chamber, or if he became rich, people might say that he became rich from the withdrawal from the chamber. For it is a person’s duty to be free of blame before men as before God, as it is said (Numbers 32:22): “And be guiltless towards God and towards Israel.””

How we are perceived – even incorrectly – too often becomes reality. And while we are advised, also in Mishnah, to judge with a good eye, an ayin tova, we often do not – hence the good advice. Leave no room for doubt, especially when managing money!

We don’t just see accounting in this parashah, we read repetitions of certain phrasings, for example כַּאֲשֶׁ֛ר צִוָּ֥ה יְהוָ֖ה אֶת־מֹשֶֽׁה which is repeated 19 times.

Hmmm. There are also 19 blessings in the weekday Amidah. For connection, we turn to the Ba’al ha Turim (Jacob ben Asher, an expert in Jewish law, Halachah, wrote the Arba’ah ha Turim, the Four Rows, in Iberia; he died in 1343).

He taught as follows: The Anshei Knesset, the men of the Great Assembly, knew the Temple, the Beit haMikdash would be destroyed by Rome. They needed to preserve what would soon become a remnant: Temple-Judaism. What did they do? They ensured there were 19 blessings built into our daily prayers; by doing so, they linked the building of the Mishkan to the Beit haMikdash, and the animal sacrifices of the Beit haMikdash forward into our daily prayer. They linked Torah to Temple Judaism to what would become Rabbinic Judaism. These forward thinkers created an architecture of prayer from parchment and stone. They tied ancient past to perilous present to unknown future, and in doing so, they created a Judaism that survived destruction. We now are able to carry our Judaism with us.

This continuity is also confirmed in another teaching we read early in our weekday morning service, from Avot D’Rabbi Natan 11a.  “Rabban Yohanan ben Zakkai was with his disciple Rabbi Joshua near Jerusalem after the destruction of the Beit haMikdash. Rabbi Joshua looked at the Temple ruins and said, “Oiy lanu, alas for us! The place where we atoned for the sins of the people Israel through the ritual of animal sacrifice lies in ruins.” Then Rabban Yohanan ben Zakkai spoke to him these words of comfort: “Be not grieved, my son. There is another way of gaining atonement even though the Temple is destroyed. We must now gain atonement through deeds of g’milut hasadim, loving-kindness. For it is written, “Lovingkindness I desire, not sacrifice.” Hosea 6:6

Pekudei teaches us to look with a good eye and to not create any cause for doubt. These words teach us that we are as responsible to each other as we are to God.  And perhaps most importantly, the words of Pekudei inspired generations of Sages, who taught us that we must each continue weaving the threads of Torah forward into our own tapestry of Judaism, through prayer and acts of loving kindness.

Chazak! Chazak! Veyetnasake! May we all be strengthened in the blessing of each other through Torah.

« Vayakhel Vayikra or Postcard from the Wilderness »