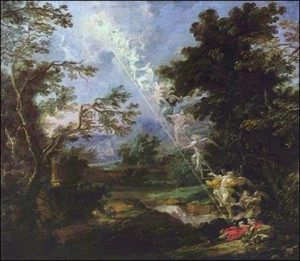 Shalom Aleichem. There was a chassid who used to travel a great distance to be with his Rebbe, chassidic master Rabbi Aaron of Karlin. Once, while making his journey, he was asked why he couldn’t find a Rebbe who lived closer to his own town.

“Going to the Karliner gives me special powers,” the chassid replied. “I can read everyone’s thoughts.”

“In that case,” one man challenged, “can you tell me what I’m thinking of right now?”

“You see?” said the chassid. “That’s why I travel to Karlin…”

In Vayetze, Ya’akov is also making a journey. He has left his home, and is returning to Haran – the same land his grandfather Avraham was called to leave. The sun had set and Ya’akovpiled some stones to make a pillow of sorts, closed his eyes, and while sleeping, he had a dream about a sulam, a ladder connecting this world with the beyond, with angels ascending and descending. Every year Vayetze and the Karliner’s teaching awaken me to my own journey, my angels, and my sulam.

My journey began with a teaching decades ago, with my-then Rabbi Victor Reinstein. Today we often exchange Vayetze letters, exchanging news of our lives and still noting our latest thoughts on this mysterious sidra.

The second pasuk in Vayetze says, “Vayifgah bamakom,” which means, ‘And he met up with that place.’ But Rashi, elaborating on the term vayifgah, teaches us that pegia (the root of the word), also means to entreat.Ya’akov met up with, encountered, and entreated with God (HaMakom) – or was he encountering his own place of separation, of wound, within himself?

In his book, Beit Aharon,the Karliner, Rebbe Aharon, suggests the word vayifgah also means wound or injury; he suggests we are all on a journey of healing, not just Ya’akov. Ya’akov was fleeing from his brother, but also leaving his family.

His heart must have felt wrenched, not just by leaving, but by his actions that had precipitated his flight. He was wounded, and separated within and without. The Karliner teaches that part of our life-work is to repair our separated and wounded heart-selves, so that our hearts will not be divided against our place, our God, Ha Makom.  Shelo yihiyeh libcha chaluk al HaMakom

The Karliner taught that healing our separations from God is linked to healing our inner woundedness, and the only way to effectively heal is through deep encounter, through entering deep prayer, vayifgah bamakom. Yet how do we pray when we feel separated from our Source?  This dilemma is our journey. This is our sulam. We are all ascending and descending from HaMakom.

For nearly 25 years this phrase Vayifgah bamakom has taken me on a journey. To New York City, from Eichler’sto Levines, and to Der Arbeter Ring, the Workman’s Circle;all stops in search of information about the Karliner. It has taken me through a friend and emissary to Israel and to JFK airport. But to shorten a long story, we will begin at my first stop, at Eichler’s Bookstore. I wandered around, finding nothing, and finally asked one of the frum young man, who was busy sorting kippot, if he knew anything about the Karliner. He startled, abruptly and then he asked me, “Who are you? Where are you from?” I stuttered a bit, taken aback by his brusque tone, and mumbled something about Victoria, finding out later he barely knew where Canada was. He ran to the phone and called his Rebbe – he was a Karliner, he called back to me, over his shoulder, in fervent excitement. He said you could ask a thousand New Yorkers they could never tell you about the Karliner. “Who are you”?

He then invited me for a Karliner Shabbos, to celebrate Shabbos with a joyous abandon I would never experience anywhere else, but I shyly declined. I had played enough Jewish geography by then to know that within one minute I would be deemed treif. The joy, the exuberance of the Karliners would not, I knew, extend to a lesbian convert.  But then I continued to meet that same Karliner, year after year. He would leave one job and then appear at my next destination – a year, even two years later. He sent me to learn Vayetze with the Karliner rabbi who ran the Bialystoker Center for Nursing and Rehabilitation which was still standing in the Lower East Side – and then I was invited to a wedding downstairs, where the hassen, the groom, and kallah, the bride, were surrounded by angels in wheelchairs.

I think of Vayetze as the original encounter therapy. We need to follow the Mystery that is core to our journey, follow the clues we are given, face into our absences and separations, and let those absences and empty spaces guide us back to prayer, back to God.  Angels will guide us, a bit like my elusive, impish Karlinerboychik – and one day we will surprise ourselves with the question that has dared not yet pass our lips.

Today, when we read Vayetze, I still travel to Karlin. I still ask my angels to help me heal, as I know the healing is never done. I wonder where my Karlinerboychik is these days – I know there was something he was yearning for and I wonder about his journey. And I am filled with yirah and rachmanes, awe and compassion, for the pain, the separation and the healing of this journey we are on. I know we each have a sulam, we each have our angels, who come to us in the stillness of the night, and in that stillness, we being to heal. Aleichem shalom.