This is my final message for the season, as I am on holiday during July. Balak is an interesting Torah reading with which to say adieu.

We open our morning services with the words “Mah tovu, ohalecha Yaakov…words recited by the non-Jewish sorcerer Balaam when he viewed the tents in the valley below him. He could only recite words of praise for their presence, instead of the curses he had been hired to project over the Israelites. These are comforting words and welcome words.

END_OF_DOCUMENT_TOKEN_TO_BE_REPLACED 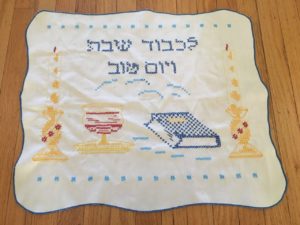 I am honoured to be at a Bat Mitzvah ceremony this Thursday, July 18, with the family and friends of Annie Marcovitz. The following text is Annie’s D’var Torah, which I thought would be a lovely way to share her simcha with Kolot Mayim members. The photograph is the challah cover that Annie mentions.
Shabbat shalom

Hello everyone, thank you for coming to my Bat Mitzvah, especially to those who come from far away. I’m really excited to have everyone here. My parsha is Balak where we meet the original talking donkey, not the one from Shrek.

The Israelites are making their slow way to Moab. The Moabite King, Balak, feels that the Israelites are going to take over his land, that they might overwhelm and overpower Moab. The Moabites said, “Now the congregation (of Israel) will lick up our entire surroundings, as an ox licks up the greenery of the field.” In response, King Balak sent multiple messages to the wizard Balaam… to put a curse on the Israelites – but Balaam refused. He talked to God and God told him that, “You shall not go with them, you shall not curse the people for it is blessed.” Finally, Balaam agrees to go with the messengers, but he tells the messengers he will only speak the words that God puts in his mouth.

Balaam begins his journey while riding his donkey, who will soon be that talking donkey I mentioned earlier. God decided that He didn’t want Balaam to go to King Balak, so God sent an angel holding a sword to block their path. God only let the donkey see the angel, while Balaam only saw a clear pathway ahead. The donkey sensed danger, and it started to back up into a fence. Balaam started to strike his donkey. God then opened the donkey’s mouth and the donkey asked Balaam, “Why are you hitting me?” Balaam hit the donkey three times before he saw the angel holding a big sword. The angel spoke to Balaam, saying that Balaam should be grateful to his donkey because if he had gone any further the angel would have killed Balaam and let the donkey go.

What could possibly be the message that comes from this story of a talking donkey and a wizard? I think Balaam should have trusted his loyal donkey. But he didn’t – it is almost like Balaam was wearing donkey-blinders. Balaam finally saw the angel after he had beaten his donkey three times. The angel of God didn’t kill Balaam, and again Balaam said he could only speak the words that God put in his mouth. God through the angel gave Balaam a second chance, and Balaam finally recognized the donkey was seeing something he couldn’t. I think if someone has been truthful and loyal in the past, don’t lash out on them because of a misunderstanding. Maybe we find out later that we were at fault, that our eyes were closed to the truth. We are all humans. Or donkeys.

Maybe this section of Torah is trying to teach us to trust, just like Balaam should have trusted his donkey. Sometimes we may misunderstand what our friends are doing. It is important that we put ourselves in their shoes, to understand their actions. If this person has helped you, or been there for you or done anything else that has earned your friendship then they still deserve our respect depending on the mistake. Often times, their actions were to help you just like the donkey was helping Balaam.

Three years ago when we moved here from Toronto, we lost a couple of boxes in the moving process. One of the things that we lost were two very special challah covers. They were made by my great Bubbie – she sewed and embroidered these challah covers – we believed we would never see these precious challah covers again. Last year before Passover, we were grocery shopping at Congregation Emanu-El, the Conservative synagogue downtown. Before we left we decided to look in the gift shop for anything to add to our collection of Passover tchotchkes. There was a small basket of challah covers, and we found one that looked very familiar. We decided to buy it. We thought it might be one of the Hallah covers that we lost in the move. We asked for photos of the families other challah covers and we found it was the exact same pattern and exact same colours. We came to the conclusion that the moving company had delivered the box to the wrong house – the
people had given the cloth to Congregation Emanu-El and two years later we were there to find it and buy it back.

So how does this story of the lost-and-found challah cover tie in with the story of Balaam and Balak and the people Israel? I believe that our stories are linked because I feel like our eyes were closed to the challah cover and then re-opened – for a reason. That reason was to appreciate the challah cover even more – after it found its way back to us. To me it symbolizes our destiny, or to use a Jewish word – bashert.
Most of my family has a similar challah cover made by my great Bubbe. It feels like each of us were supposed to have one, it is a distinctive family treasure and every Friday night I think of my great Bubbe and how special it is that we got it back. After Balaam’s eyes had been opened and he had understood the donkey’s actions, he must have appreciated the donkey much more for being protective and saving
his life. The challah cover didn’t save our lives but it did make us
appreciate it and its story after our eyes had been opened and we had found it.