Vayeira or the Many Shades of Shylock 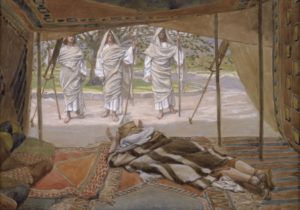 Last week I noted that there is a Midrashic tradition that Torah existed before Torah (as we know it).  In Midrash Bereshit Rabbah we see an elucidation of this idea. Referencing Mashal, or the Book of Proverbs, our Sages discuss how Wisdom existed before Creation. “The Lord made me as the beginning of His way, the first of His works of old” [Prov. 8:22]. Our Rabbis loved back-dating – “the older, the better”, and this pre-history certainly grounds that maxim.

If we hold Wisdom as an entity apart, however metaphorically, then Wisdom-as Torah existed prior to Creation. Wisdom is viewed almost as an architectural plan, which God then used as a blueprint.  Our Sages understood Wisdom-as-Torah as a foreshadowing, a device that preceded Torah-as-historical document which by nature, entails looking back, giving the reader a history.

Within Wisdom, there was a glimpse, perhaps the briefest of appearances, of what was to come. We see this apparitional collapsing of physical entity into belief much later in the precise architectural plans for the Temple found in the Books of Kings. These plans were written from memory into word, which then functioned as a fulcrum of both memory and hope, as necessity required. In this way, Torahfunctions within tenses almost as God’s description of Self: I was, I am, and I will be.אֶהְיֶה אֲשֶׁר אֶהְיֶה, Torah, becomes that liminal opening, a poteach.

All this is a bit like opening a compressed file on our computers – which this week opens to Vayeira. And Vayeira opens, with just such a liminal appearance, at the very threshold of Abraham’s tent. A question arises of just what, or whom, Avraham saw. The “text” describes a visit by God and/or three men/angels. Abraham was initially head-bent-down whilst recovering in his tent, yet he immediately lifts his eyes and arises. “They” are present in front of Abraham, and yet distant enough that he must run towards them. So too do we experience both the imminence and transcendence of a personal, yet distant God.

We know when we feel the Presence of God –if only for the merest of moments, (with credit to Anaxagoras).  Anaxagoras lived in Greece prior to Socrates, and he was also a philosopher. He noted that, “Appearances are a glimpse of the unseen.” Unseen? Who appeared to Abraham? What did he glimpse?

Further into Vayeira, on the way to Sodom, we encounter Abraham in a verbal duel with God: Who shall live and who shall die?I can’t help but cite Ann Coulter here, who stated that she…”gets a little belligerent when not enough protesters show up at my appearances.” I would like to suggest that perhaps God feels a bit like Coulter. God needs many more of us to show up, challenging and arguing, as did Abraham. Maybe God is saying to us here, “Welcome Me, yes, but argue with Me, challenge Me,be My ezer knegdo, be strength-against-Me.”

I recently watched a documentary about “The Merchant of Venice.” The focus of the presentation was Shylock and the question was Shakespeare’s intention; was it to make Shylock an object of derision? Or was Shakespeare’s intention to plead for the humanity of this man, a Jew? Was this play trying to make what was unseen, seen? His characters are like Matryoshka dolls, nestling within themselves, providing glimpses of tragedy within what was ostensibly a comedy.

“Am I not man like any other, do I not bleed”? Shylock demands. And Avraham asks of God – “are these people of Sodom not Yours?… Will you even obliterate righteous with wicked?” Shylock and Abraham become one with their questions. The courts convene. One court consists of Avraham trudging beside his God. He and God have both chosen each other – in love. But Abraham is dogged – he is not letting God off on any hook. And God too is resolute. There is no happy ending. Not for Sodom.

Shakespeare’s play also ends unhappily, with Portia demanding that Shylock not only be denied his pound of flesh, but that he be punished. Shylock, for his very asking that his bond against a Venetian be redeemed, must now convert to Christianity – a fate so false to Shylocks soul that it is painful to look up. We feel a blade slice through our soul, and we sit like Avraham, our heads bent down.Aach. What will we see when we look up?

Appearances. We think we know what we see. And yet even God wonders what to reveal, what to conceal. God asks, “Should I conceal from Abraham what I do?” Glimpsing what seems concealed, glimpsing that moment where we become Thou, in Buber’s language –this is our journey. God and Shakespeare, Abraham and even Ann Coulter – we all want what is unseen to become seen. Perhaps, with chochmah, with Wisdom guiding us, that holy blueprint can live within us, and guide us towards such a glimpse. An appearance. Vayeira. Shabbat shalom.