January 7, 2019 by Rabbi Lynn Greenhough • From the Rabbi's Desk 0 Comments 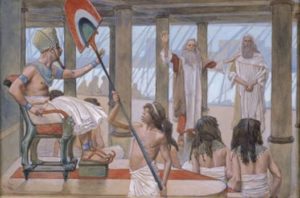 Many years ago, while on a sabbatical in Los Angeles, we had been invited for an upcoming Shabbat afternoon to visit a friend – and her pool – which at 100+ degrees sounded like a great idea. Except we were Canadians. It was January, and it never occurred to either of us to pack our swimsuits. So, I shopped all over LA, as I wanted to find something that didn’t plunge down to there or up to there! Such a suit was not to be found, not in LA. Finally, in desperation, en route to our friend, we stopped at a local Target – more for the air conditioning than any hope of finding anything suitable.

Surprise – a simple black maillot was purchased, and now, well cooled by the frigid air conditioning, we drove a few more miles, parked our pickup truck (one of only two we saw our entire time in LA), and walked around the back to the pool. Imagine my second degree of shock and surprise when all the lovely ladies were floating in the water, au naturelle. Turns out I didn’t need that bathing suit after all. Maybe this was God giving me a sign I should not shop on Shabbos!

At any rate, all of this is mere background to the word “Bo.” Whilst we were floating in the pool, Aaron noticed a small pack of dogs racing around a very large back yard compound. He asked our friend (originally from Winnipeg) about the dogs and it turned out that the cute little terrier was a stray they hadbrought back from their last trip to Israel. Aaron called out, “Bo!”(Come)  and the dog screeched to a stop. He looked around, very excitedly, and Aaron called “Bo” again. The dog almost ran into the pool! Such is the power of mamaloshen, the mother-tongue. Even the dog was thrilled to hear Hebrew spoken again.

In our reading this week, God is saying to Moses the word Bo.“Come to Pharaoh, for I have made his heart hard.”And so in Bo we again encounter a God who decides to, “amuse Myself with Egypt” – all with an eye to Moses (and us) repeating what will eventually happen to our children and our children’s children. I don’t know how much Hebrew Moses knew. He grew up in Egypt, then recused himself to the hills of Midian – I am not sure the word Bo was as electrifying for Moses as it was for our little dog in LA. And why should Moses go to Pharaoh if God is so clearly toying with the Egyptian leader – what is in it for Moses? Other than a good story eventually – which as my opening will attest, is always money in the bank.

In Bo, we will read of the final three plagues – culminating in the death of the first-born, which leads Pharaoh, in a heart-broken rage, to banish the people Israel from his land. In the dark of the night, the angel of death “passed over” each household where the lintel was painted with blood, and thus the people left this land of servitude and hardship. Not the most auspicious of leave-takings.

In some ways the people at this point resembled that mongrel dog. They were hungry, worked to death, and probably had very little hope of any redemption. But saved they would be.

Moses was challenged from the beginning of his story. Early on in Shemot after he kills the Egyptian overseer, he is addressed defiantly, in words that archly foretell the up-coming challenge from his cousinKorach: “Who made you a man, a ruler, and a judge over us?” Moses is in that classic middle manager position – caught in a vise grip between the people, embittered and edgy, and an equally, at times, bad-tempered God. At this stage, God can seem to be a vengeful and almost frivolous God, seemingly toying with a people to see how far He can push them.

Moses can’t please the people and he can’t, seemingly, please God. Oiy, such rachmanes, compassion, I have for him.

Bo – a one syllable command – as commands tend to be. Interestingly, the word Bo is modified by a disjunctive trop symbol, a tipcha, indicating a small pause after the word is sung – perhaps this mixed message (Come-but-pause) also connotes a mixed sense of how everyone is to proceed.

Bo, kinder, do me a mitzvah. Come with me, children, says God, and I will give you a story for all time. A story of freedom that the whole world will tell, a story so that all people, for all time will know, “I am HaShem.” Sometimes Bo is just Bo. Sometimes Bo evokes a world of memories. And sometimes Bo opens a door to an unimagined future. Bo. Past, present and future, Ehyeh asher ehyeh, I am Bo. I am Be-coming..