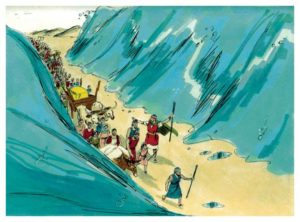 I didn’t realize until I had to write a d’var Torah every week, how often I say, “Now this is truly one of my favourite sections in all of Torah” – I am like a woman with many grandchildren. Years ago I was in Brooklyn. I had made arrangements with a very orthodox/observant Chevra Kadisha (Jewish burial society) to come by, and if possible, help with a taharah, (ritual preparation for burial). The woman in charge and I went back and forth on the phone discussing my wish, because of course you can never plan these things. When I arrived at noon, she said, Welcome! Your prayers have been answered – we have a taharah in 30 minutes – and then we both laughed. Chevra humour.

While I waited for the time to leave for the taharah, the clock struck noon, with a little child’s voice calling out “Bubbe, Bubbe, it’s Rivkie.” I looked around the room for the source of the voice, and my new friend pointed to the clock, apparently not an uncommon clock in her world. It was set to ring out each hour with the voice of a different grandchild. She told me she had mentioned the clock to a friend of hers – also in the Chevra, and the woman scoffed, and said, “I‘d have to buy 6 clocks – I’d have voices calling me from all over the house.” She had 16 children, all grown and married and all of whom were well on their way to having many children. Too many clocks!! But can you have too many favourite readings in Torah? I think not.

All this to say, B’shallach is a particular favourite, because we see the Shir haYam, the Song of the Sea, laid out in such a unique fashion. Some Chumashim attempt to lay out the Song in a brick-like pattern on the printed page to replicate how the Song is presented in a Sefer Torah, but nothing can quite match seeing the distinction of the Song in the Sefer Torah scroll. To gild the lily, or as I like to say, zehavving the shoshanna, we also chant the Shir haYam in a very unique fashion.

We alternate singing some verses in regular Torah trop, and other verses in a trop unique to this Song. Another vise grip-to-the-brain moment. I have spoken before about my deep regard for our musical tradition. B’shallach epitomizes the song of freedom – in word and in sound. Freedom bursts through what is known, the norm. Freedom cannot be contained – and yet, in a new order of instructions from God at Sinai, a new order must be chosen. B’shallach lies between chaos and

order, escape and dispersion, moving forward and longing to return to what is known. Freedom is a complicated song, and our teachers make sure we remember this incontrovertible fact every year.

B’shallach, I suggest, contains our history of re-invention, of seeking freedom within new order, throughout the centuries. As Reform Jews we are often dismissed as Jew-lite, as not really Jews. I would argue that Sinai was a Reform moment. I would argue that Mishnah was a Reform moment. That the Ba’al Shem Tov himself was a Reforming Jew. Each of these moments, each of these people saw through what was and saw a light of a new freedom – to be Jews in a changing world.

They knew, and we know, Judaism must change to survive. If Judaism were built like a solid brick wall with no windows, no light could enter. The Shir haYam is written in a brick-like fashion but with openings between the verses. The openings are like the windows of the Beit haMikdash. The openings were built wider on the outside than on the inside. Unlike private dwellings, where openings for windows were narrower on the outside and wider on the inside, causing daylight to spread inside, the rabbis viewed the inner sanctuary of the Temple as a “light source” for the world, thus the windows were constructed thus to optimally spread the holiness of this light outward.

So too are these openings in the Shir haYam windows, allowing God’s light to sparkle within us, dancing with us on the Sea to freedom.

Make a Difference for Someone