Visions of Chanukah delights are beginning to fill our kitchens – or at the very least, our thoughts! So many options from cheese latkes to potato latkes – with or without onions; sufganiot filled with jelly or lemony ricotta balls dusted in sugar. We wish you every sweet and savoury culinary delight!

Last Shabbat service, I touched on the distinction between the Greek myth of Narcissus staring at his vision in a pool of water, and what we read in Torah about Ya’akov standing alone, l’vado, by the banks of the River Yabbok. These two men, one Greek and one an Israelite, seem to epitomize some of the tensions inherent in this season of Hannukah. Hannukah is usually presented as a holiday to commemorate the overthrow of the Syrian Greeks by the Maccabees, and the subsequent re-dedication of the Beit HaMikdash, the Temple. Jacob over Narcissus. But, as with much, Hannukah is more complicated.

In many ways Hannukah also commemorates our own internal struggle for meaning and identity – a wrestling of conscience and of body; just as those second century Jews established what their world view would be, what their religious rites would be, and who they would be as Jews, so do we. Are we Jews or are we Greeks? 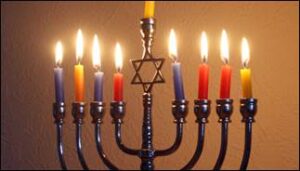 This is a time of year where the darkness seems to beg for lights and twinkling decorations. As we walk around our neighbourhood, Aaron and I often comment with delight about the baubles decorating our neighbours outdoor trees. Today I read daily on FaceBook of young Jews justifying having “Holiday” trees in their homes, adopting the new “Greek” traditions of Christian/pagan heritage. I continue the tradition of my family, making my paternal grandmother’s steamed carrot puddings, lit aflame with (yes, more) whiskey. But the pudding is not for Christmas, and first we eat homemade knishes!

We are at a time where we can choose from that immense multicultural smorgasbord. And it is also a time to stand by the river Yabbok, as did Jacob, and wrestle with the deepest sense of who we are. And as we do so, let’s consider adapting some of our teachings from Torah, even as we continue to love our precious traditions. And as we stand, let’s listen deeply for our own name to guide us.

Have a very freilich and joyful eight days of light – and latkes. Hanukkah sameach!

Love to all, from both of us,
Rabbi Lynn and Aaron

Zoom Lecture: Like Everyone Else But Different: The Jewish Glass is Half Full